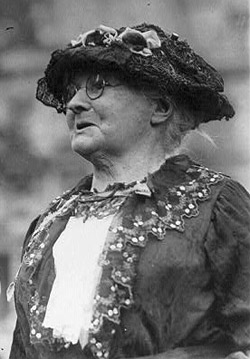 Among the gravesites in the old Union Miners Cemetery in Mount Olive, Illinois, there stands a monument dedicated to and elderly woman, Mary “Mother” Jones. Standing no more than five feet tall, clad in a black dress with just a touch of lace at her throat and wrists, Mother Jones was an iconic view of a grandmother.

But with a life that spanned the presidencies between Andrew Jackson and Herbert Hoover, Mother Jones focused her grandmotherly warmth on the workers in the minefields and her scorn on the bosses who exploited them.

To her admirers se was labor’s Joan of Arc or the Miner’s Angel; to her enemies, she was, as President Theodore Roosevelt called her, the “most dangerous women in America.”

Mother Jones began her career in the labor movement as an organizer for the Knights of Labor. She joined the organization after several tragedies took place in her life: the loss of her husband and four children during a yellow fever epidemic in 1867 and the loss of her business and property during the Great Chicago Fire of 1871. It was the loss of her children, many have argued, that caused Mother Jones to adopt the destitute and tyrannized as her own kin.

It was during her years with the Knights of Labor when people, including Mother Jones, realized she was a better agitator than an organizer. When she spoke, she was charismatic, energetic and passionate – bringing her audience to tears, applause and laughter. She spoke with an explosive intensity to her mostly male audience that inspired them to raise their own voices in the workplace by demanding the wages and working conditions they justly deserved.

By 1890, she joined the coal miners’ fight, becoming an organizer for the newly formed United Mine Workers of America. She traveled to West Virginia, Alabama and Colorado, the hardest areas to organize. But as many of the organizers spent their days organizing the men, Mother Jones also organized the women and children.

In 1902, she told striking miners in Arnot, Pennsylvania, to “stay home with the children for a change and let the women attend to the scabs.” She then led a march of the miners’ wives from mine to mine, driving away strikebreakers with brooms and mops. She continued to use this tactic in other strikes throughout the years. In 1907, in Westmoreland, Pennsylvania, she urged strikers’ wives to stand at the picket line with their children. If arrested and imprisoned, she told them to sing as loudly as they could so the townspeople would be happy to have them released.

In 1903, to dramatize the need to abolish child labor, she led a caravan of striking children from the textile mills of Kennsington, Pennsylvania, to President Theodore Roosevelt’s home in Long Island, New York. They carried banners that read, ‘We want time to play!” and “We want to go to school!” In 1912, she led a march of miners’ children through the streets of Charlston, West Virginia, to draw national attention over the Paint Creek-Cabin Creek strike.

Mother Jones was such an effective rabble-rouser that she was denounced in the U.S. Senate as the grandmother of all agitators. However, she cherished her image as a fighter. When introduced to a crowd as a great humanitarian once, she snapped, “Get it straight, I’m not a humanitarian, I’m a hell-raiser.”

Her image, however, got her into some trouble. Mother Jones found herself in jail as much as she was out organizing. She was arrested for numerous charges from sedition and libel to assault.

In 1913, she was convicted in West Virginia of conspiring to commit murder during a miners’ strike. She was sentenced to twenty years in prison, and held for a brief amount of time before a U.S. Senate investigation cleared her of all charges. She was 83 years old.

Mother Jones continued to agitate and organize. In 1923 at age 93, she was still found working amongst striking coal miners in West Virginia. She was determined never to leave the side of her adopted miners. Before dying in 1930, she requested to be buried near “her boys,” men who died during the Virden, Illinois mine riot of 1898. She was buried just a few feet away. Her funeral was attended by thousands of mine workers – the men mourning the death of their mother, their angel, their Joan of Arc.