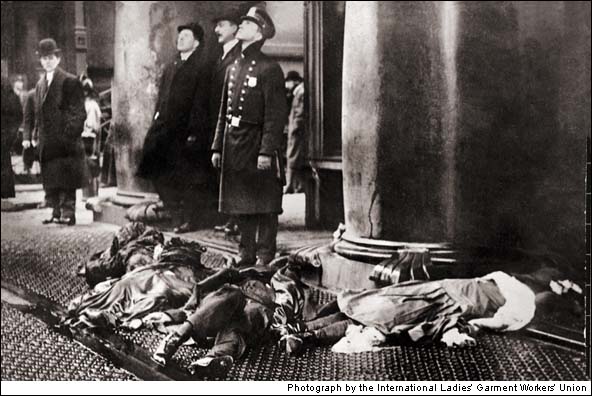 Above the bustling streets of New York City, just before closing time on March 11, 1911, a fire broke out on the top floors of the Asch Building of the Triangle Shirtwaist Company. Within minutes, the quiet spring afternoon erupted into chaos, destroying the lives of young workers. Within the thirty minutes it took to put out the fire, 146 of the 500 employees lost their lives in the tragedy. The fire brought to light the story of America’s under class of immigrant labor forced to work excessively long hours for low wages in unsanitary and dangerous working conditions.

Prior to the fire, the Triangle Shirtwaist Company was already well known outside the garment industry.

A massive strike by women’s shirtwaist makers in 1909, known as the Uprising of 20,000, began with a spontaneous walkout at the company. For years, the International Ladies’ Garment Workers Union (ILGWU), the precursor to UNITE-HERE, was actively trying to organize the New York garment industry, which consisted of mostly of young female immigrants of Italian and European Jewish decent. While the union negotiated a contract covering most of those workers after a four-month strike, Triangle Shirtwaist refused to sign the agreement. This was to have a traumatic effect since at that time the ILGWU was pressuring companies to correct the safety issues plaguing the garment industry.

When the fire broke out, workers on the eighth and tenth floors managed to escape. However the warning about the fire did not reach the ninth floor in time. The floor had only two doors leading out. One stairwell was already filling with smoke and flames by the time the seamstresses realized the building was ablaze. The other door had been locked, ostensibly to prevent workers from stealing materials or taking breaks and to keep out union organizers. The only fire escape buckled under the weight of the factory workers trying to escape the inferno.

Other workers waited near the windows to be rescued, but neither the ladders nor the water from the hoses could reach the top floors of the building. Many of the workers chose to jump, images reminiscent of those witnessed on 9/11. In the end, bodies covered the sidewalks surrounding the building by those who chose to take the risk rather than burn alive.

The employers, Max Blanck and Isaac Harris, were tried but were acquitted because the defense was able to successfully discredit the survivors who testified. In 1913, the employers lost a subsequent civil suit, forcing them to pay out compensation in the amount of $75 per deceased victim. In response to the tragedy, the ILGWU led a coalition of progressive reformers to push through comprehensive safety and workers’ compensation laws.

In 1995, 72 Thai immigrants were discovered in El Monte, California, locked in an apartment complex surrounded by razor wire and forced to work for $2 an hour. Workers reported  to authorities that owners of the operation threatened them with rape and murder if they stopped working.

The recent statistics, combined with the images in El Monte have caused immigrant-rights advocates and labor leaders alike to warn that another incident like the Triangle Shirtwaist fire is only a matter of time.

But despite evidence that the environment is ripe for another human tragedy, Congress has not acted on the issue in any substantive way.

For those whose passion resides in the Labor Movement, it proves that unions are as relevant today as they have ever been.