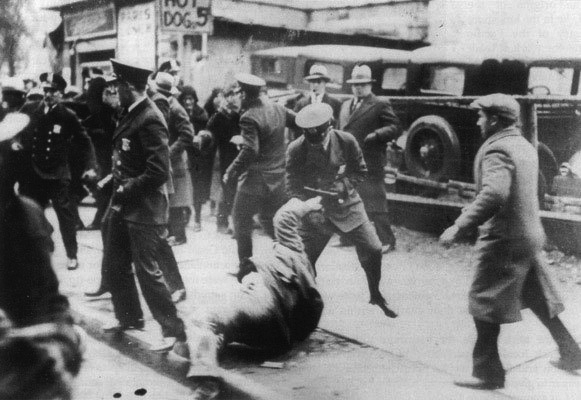 In May of 1934, the city of Toledo, Ohio found itself choked for five days by tear gas as National Guardsmen and company police battled local residents and striking workers. The city streets were littered with smoldering canisters, bricks, stones, and broken glass as workers from the Auto-Lite plant literally fought for their right to organize. In the end, two men were dead, thousands injured, and leaders from both sides of the battle would find themselves behind bars. Although the strike began on April 12th and continued to June 3rd, it was these five days in May that would forever forge the strike into Toledo’s psyche, haunting the city with its ghosts.

The 1930s were a tumultuous time for labor. The country was in the midst of the Great Depression with unemployment over 20%. A worker’s right to organize was being shaped into federal laws and the labor movement was on the verge of major growth. The American Federation of Labor (AFL) had set its eyes on the growing automotive industry.
The AFL, traditionally a union dedicated to the principles of craft unionism, approached the auto industry differently. It used the formation of Federal Labor Unions (FLUs) to organize auto plants.  FLUs were temporary unions which organized workers on an industrial basis, then once the campaign was successful, the FLU would be dismantled and the workers would be divided into the various AFL craft unions. By 1934, the AFL had successfully organized 32,500 auto plant workers using this model.
During that year, workers in FLU 18384 began organizing in Toledo, Ohio for union recognition and higher wages. On February 23, 1934, the Auto-Lite members engaged in a recognition strike and a demand for a 10% wage increase. Lasting only five days, the strike ended with both parties agreeing to continue negotiations over wages and conditions. However, both parties were unsuccessful in reaching an agreement and on April 12th, the workers struck a second time.
Other organizations joined the workers on the picket line, successfully sealing off the factory. In response, the employers convinced a judge to order an injunction prohibiting more than 25 pickets at each entrance. Picketers ignored the injunction and several were arrested.
The Auto-Lite company hired strikebreakers, armed guards and funded the payroll for newly deputized county sheriffs. They purchased tear and vomit gas munitions and stockpiled them in the plant. Picketers responded by reinforcing the line with an additional 6,000 to 10,000 people.
On May 23rd, Lucas County Sheriffs beat an elderly man on the picket line, resulting in a scuffle with outraged picketers. Infuriated, the crowd began throwing stones, bricks, and bottles. The police responded with bullets. Then for seven hours, workers and police battled in the streets. The next day, 900 National Guardsmen were called in to squash the worker’s rebellion. During the conflict, guardsmen shot and killed two supporters of the strike, Frank Hubay and Steve Cyigon.
Throughout the next three days, running battles ensued between National Guardsmen and workers. The air was so thick with tear gas that local residents began attacking National Guardsmen demanding they stop gassing their city. The Auto-Lite president was arrested after residents filed complaints stating he had created a public nuisance by allowing guards to bomb their neighborhoods with tear gas. Several union leaders were also arrested for breaking the judge’s picket injunction.
The battle finally subsided when Charles Taft, son of William H. Taft, brought all parties to the table to negotiate.  On June 2, 1934, Auto-lite and FLU 18384 reached an agreement, with a 5% wage increase, a minimum wage of 35 cents an hour, and union recognition. The following year, FLU 18384 became United Auto Workers, Local 12.
The victory by FLU 18384 led to the widespread unionization of Toledo. Today, Toledo remains one of the most unionized cities in the United States. In May of 2001, almost forty years after the plant closed, the city dedicated a memorial on the site of the factory to commemorate the 1934 strike. The site was turned into Union Memorial Park, and two life-sized bronze statues of picketers were placed in a plaza made of bricks salvaged from the original auto-plant. Now, while children play, ghosts of Toledo’s labor martyrs watch over them.