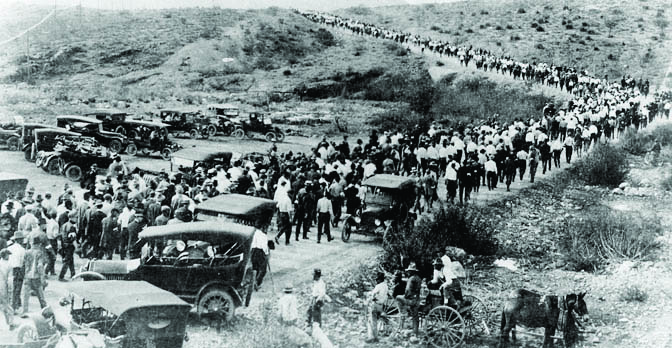 In the early hours of July 12th, 1917, 2,200 men wearing white armbands gathered in Bisbee, Arizona. At 6:30 am, on the sheriff’s command, these newly deputized vigilantes rushed through the desert mining town detaining all men thought to be union sympathizers. Hours later, 1,286 men were loaded onto manure-coated cattle cars to be transported 200 miles and 16 hours through the desert heat. The men were abandoned in the small town of Hermanas, New Mexico, without food, water, or shelter. The incident, known as the Bisbee Deportation, would be one of the largest vigilante actions against organized labor in American history.

In 1917, the town of Bisbee was dominated by the copper mining industry. Phelps Dodge, the leading mining company in the area, owned much of the town including the hospital, library, only department store, largest hotel, and local newspaper. On account of World War I, the price of copper had nearly tripled, allowing the companies to reap tremendous profits. However, the mining and living conditions were poor for the 5,000 workers employed by the mines. Previous attempts to unionize were met with the termination of union sympathizers.
But in 1916, the International Union of Mine, Mill, and Smelter Workers (formerly the Western Federation of Miners) successfully organized 1,800 miners in the area. Early in 1917, the Industrial Workers of the World (IWW) formed the Metal Mine Workers Union No. 800, organizing mostly among the lowest paid workers, immigrants from Mexico and Southern Europe.
The IWW presented the companies with a list of demands, which included improvements to working conditions, an end to discrimination against union members, equal treatment of immigrant workers, and a flat wage system to replace the sliding scales tied to the market price of copper. The company refused every single demand.
On June 26th, the IWW called for a strike and more than 3,000 miners answered their call. Although the strike was peaceful, local and state authorities requested that federal troops break the strike, purposely misrepresenting the workers’ actions as pro-German and anti-American. The federal government refused.
Prior to the Bisbee strike, IWW workers also struck Phelps Dodge mines in Jerome, Arizona. With the cooperation of the sheriff there, vigilantes kidnapped more than 100 men and jailed them. Sixty-seven of these men were then placed on a train and deported to Needles, California. The Jerome deportation proved to be a test for Bisbee.
On July 11th, Phelps Dodge executives provided the sheriff with a list of men who were either on strike, refused to scab, or were union sympathizers. Led by local businessmen and pro-company miners, two groups were formed: the Citizen’s Protective League and the Workman’s Loyalty League. These groups helped gather 2,200 local citizens who were deputized to assist in the deportation. The following day, over 2,000 men were detained and under the threat of armed guards and a belt-fed machine gun, they were marched two miles to Warren Ballpark. The men were offered release only if they denounced the union and returned to work. Seven hundred men (none of whom were union members) agreed to the terms.
At 11:00 am, 23 cattle cars belonging to El Paso and Southwestern Railroad arrived to deport the remaining 1,286 men. As the train traveled along the guarded tracks, the temperature rose to 95 degrees. Over ten hours later, the train arrived at its destination in Columbus, New Mexico, but was turned away because the town could not accommodate the men. Rather than returning with its unwanted cargo, the train traveled to Hermanas, New Mexico were it dumped the men, penniless and without food, water, or shelter. While local residents fed the men, they were left in the desert sun until federal troops arrived to escort them back to Columbus, New Mexico.
Meanwhile, Bisbee authorities stationed guards on all roads into town to ensure none of the deportees returned. The Citizen’s Protective League controlled the city for four months and with the Sheriff, established a kangaroo court. Hundreds of citizens with union sympathies were tried, deported, and threatened with lynching if they returned.
President Woodrow Wilson set up the Federal Mediation Commission to investigate the deportation. The US Department of Justice ordered the arrest of 21 Phelps Dodge executives and several local politicians and law enforcement officers. However, since no federal law was violated, the charges were eventually dropped. The state of Arizona took no action against those involved in the deportation.