EXTRA! EXTRA! Read All About the Real Newsies

Home / EXTRA! EXTRA! Read All About the Real Newsies 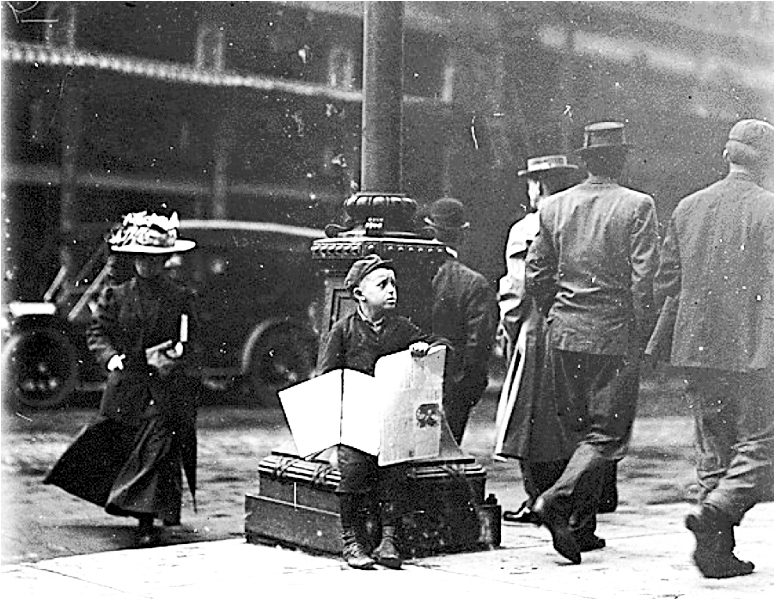 In 1992, the Disney Company produced the musical drama Newsies. This movie tells the tale of several thousand homeless and orphaned children selling newspapers on the streets of New York City in the 1900’s. Led by 17-year-old Jack “Cowboy” Kelly, the children go on strike after the newspaper companies hike up their purchase price. Some may be surprised that the movie’s singing and dancing is loosely based upon actual events. In 1899, thousands of ‘Newsboys’ went on strike against two of the most powerful newspaper owners in U.S. history. The strike spread from NYC through much of New England, causing thousands to boycott the newspapers and the companies’ owners’ eventual capitulation.

During the mid-19th to the early 20th century, the main distributors of newspapers to the public were young boys, called ‘Newsboys’ or ‘Newsies.’ An estimated 10,000 Newsboys worked the streets of New York City. They were seen and heard on every corner, yelling, “Extra! Extra!” along with the news of the day.
Newsboys tended to come from the poorest classes of society, often living on the streets. It was not uncommon for these children to be dressed in rags, without coats, and shoeless. Loud and aggressive in hopes of selling all their papers, the Newsboys were treated with contempt and considered an annoyance by many.
The Newsboys were not direct employees of the newspapers, but rather purchased the papers from the publishers directly and sold them as independent agents, earning around 30¢ a day. Unable to recoup the cost of their unsold papers from the publishers, the Newsboys typically worked from early morning to late at night or until all their papers had been sold.
During the Spanish-American War, several publishers raised the cost of a Newsboy’s bundle of 100 newspapers from 50¢ to 60¢, which was offset by the increased newspaper sales from the war. After the war, most publishers returned the cost of these bundles to their previous price. Joseph Pulitzer’s New York World and William Randolph Hearst’s New York Morning Journal, however, did not reduce their costs.
On July 18th, 1899, in response to Pulitzer and Hearst’s decision to maintain their bundles’ increased costs, a large number of New York City Newsboys refused to distribute either paper. The strike was led by an eye-patch wearing half-pint known as ‘Kid Blink’ and another teen nicknamed ‘Boots.’ They rounded up their fellow Newsboys, some with equally fantastic names: such as Barney Peanuts, Race Track Higgins, and Crutch Morris, and marched 5,000 strong onto the Brooklyn Bridge, holding rallies that shut down traffic on both sides of the bridge.
Kid Blink was known for his rousing speeches, which were often quoted phonetically in some of the other papers to keep his accent intact. The Newsboys viewed this portrayal of Kid Blink as disrespectful and asked for it to stop, but their requests fell upon deaf ears.
The World and Morning Journal hoped to stand their ground long enough, that the children would run out of food. But the strike continued and rumors began to circulate that Hearst and Pulitzer had hired thugs to bully the children into submission. However, despite bribes, threats, and violence, the Newsboys were determined to push back. One newspaper article reported that delivery wagons were having a difficult time delivering their papers because they were followed by “howling mobs of half grown men and boys, who showered them with volleys of stones and brickbats.” Other reports indicated that the Newsboys would travel in groups attacking anyone caught selling the boycotted newspapers.
The Newsboy’s efforts were effective, and within a week, circulation for both papers had dropped from 360,000 to 125,000. On August 2nd, Hearst and Pulitzer offered to buy back all the Newsboys unsold papers in exchange for maintaining the higher costs per bundle. This compromise was accepted and the strike ended.
The Newsboys Strike of 1899 has been credited with inspiring further strikes throughout the country.  Some decades after the strike, the introduction of urban child-welfare practices led to improvements in the Newsboys’ quality of life. And while the movie, Newsies, may not have been a box office hit, it has just recently become a Broadway musical, returning to the streets where it all began nearly a century ago.