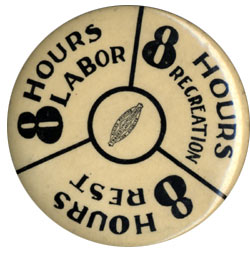 Not long ago, American workers spent the majority of their waking hours ar work. It was common for them to toil six 12-hour days a week in their jobs. In many cases, shifts often exceeded 13 to 14 hours of work in a day. As trade unions struggled to secure their rightful place in society, the issue of reduced hours became labor’s call to arms. Trade unions began to insist on the reduction of hours and the concept of the eight-hour day was born.

Organized labor tried to address the issue multiple times before the successful campaign in 1835 by trade unionists in Philadelphia. Workers took to the streets, striking to reduce their shifts from 12 hours a day to 10. Men from several unions representing the cord wainers, handloom weavers, cigar makers, printers, building trades and many more carried banners that read, “From 6 to 6, ten hours work and two hours for meals.” The result was a resounding victory for the workers of Philadelphia. Similar strikes spread nationwide with similar results.

Several states, including Pennsylvania, Maine and California established laws limiting the time allotted to work in specific industries. Such laws reduced the work hours to 10-hours a day or 60-hours a week.

Employers countered the growing movement by claiming they were deeply concerned about the “habits likely to be generated by the indulgence of idleness.” They argued that the extra time and lack of structure would lead to the workers’ ruin.

Despite their comments, employers circumvented regulations by establishing “special contracts” with the workers. Employers disregarded the laws by refusing to hire anyone unless they were willing to accept a longer working day. In some cases, employers worked together in blacklisting any worker who attempted to stand up for his legal right. Such actions made laws almost meaningless.

Despite regulation loopholes, the Labor Movement continued it’s demand for reduced hours. As momentum grew, the demand changed from reduction of hours to a more specific demand of an eight-hour day. It was this Idea that became the new battle cry of the Labor Movement, becoming the central issue for the three major trade organizations of the 19th and 20th centuries: the National Labor Union, the Knight of Labor and the American Federation of Labor. The slogan was simple, “eight hours for work eight hours for sleep, eight hours for recreation.” But labor leaders felt the goal would be best achieved through politics rather than the traditional method of bargaining table negotiations. “Eight-Hour Leagues” began to sprout up through-out the country – and were even able to persuade the infant Republican Party to adopt an eight-hour plank in it’s campaign platform. It was through these leagues that the concept of an eight-hour day began to take root in the minds of the public.

On May 1. 1886, labor leaders and the Eight-Hour Leagues used their influence on the workforce to call for a countrywide strike over the issue. Almost 200,000 workers in nearly 1,700 factories walked off their jobs. Some workers gained fewer hours (eight or nine) with no reduction in pay, while others accepted pay cuts with the reduction in hours.

Employers reacted ferociously to the labor unrest. The head of the AFL, Samuel Gompers quoted one head of industry as saying, “I regard my employees as I do a machine to be used to my advantage, and when they are old and of no further use I cast them in the street.”

Despite the strong show of force by Organized Labor, Congress did not act swiftly to make the eight-hour day the law of the land. A turning point in the struggle came when Ford Motor Company reduced its shifts from nine hours to eight a day, an unpopular move with rivals. But after seeing the increase in Ford’s productivity, most soon followed suit.

Finally, in 1916, Congress passed the Adamson Act, creating an eight-hour workday and establishing additional pay for overtime. While this law only affected railroad workers, it was the first federal law that regulated labor hours in the private sector. In 1938, the Fair Labor Standards Act made the eight-hour day a legal day’s work.