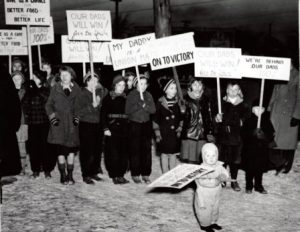 British Historian, G.R. Elton, once wrote, “It is the essence of the poor that they do not appear in history.” While this quote was said in context of the peasantry of Tudor England, it is a statement that can also be made about the Labor Movement in U.S. history. It could be argued that labor has been assigned to nothing more than a footnote in our collective consciousness. Instead, we are left with the history of the people who own the wealth but not the people who created it. It is only labor’s follies and blunders that are engraved into history, not our heroes and moments of victory.

These victories may not be highlighted in textbook pages but they affect the daily lives of every American. For example, labor’s struggle has given us the eight-hour day, 40-hour workweek, minimum wage and child labor laws. In addition, there are many things one may not consider, such as public education, which labor fought hard for as a basic right for all. The Clean Food Act and the later establishment of the Food and Drug Administration were prompted by the outcry caused by the book, the Jungle, written by the labor activist, Upton Sinclair.

Even heroes revered by this country have been washed of their connection to labor. Few recognize that Martin Luther King, Jr., the great civil rights leader, was assisting striking sanitation workers when his life was taken by an assassin’s bullet. He and other great civil rights leaders, such as A. Phillip Randolph, held the belief that labor rights and the civil rights worked hand in hand. Such ideas were hardly foreign, a century earlier, when the country was split in two in a civil war, labor unions joined in mass to fight against the confederacy and to end slavery. They saw the institution of slavery as fundamentally opposed to the welfare of the Labor Movement. Some units in the military were composed entirely of men from the same union local.

Even Abraham Lincoln, the Great Emancipator, viewed the labor movement as a symbol of patriotism. He is quoted as saying, “All that harms labor is treason to America…. If a man tells you he loves America and hates labor, he is a liar.”

Crispus Attucks, who was killed in the Boston Massacre, was known as the first martyr of the American Revolution. But some might be surprised to know the Boston Massacre began over resentment caused by British troops taking jobs from American workers. When workers protested against the troops taking ropemakers’ jobs, pelting soldiers with snow, the British troops opened fire on them, killing five colonists. Crispus Attucks allegedly led his fellow ropemakers in the protest before he was killed.

Still there are those considered to be labor’s martyred, whose lives have been taken because they have raised the voice of labor. It is these men and women whose lives and actions have been erased completely from our historical consciousness; like the 20 men accused of being Molly Maguires and the four Haymarket Martyrs, all who died with “labor” or “justice” being the last words that dripped from their tongues; There was Joe Hill, who days before the State of Utah was to take his life for being a member of the Industrial Workers of the World (he was officially charged with a murder that most historians believe was bogus), called on his supporters not to mourn but to organize;

And there are those forgotten heroes who fell victims to massacres in Centralia, Washington, Ludlow, Colorado, and the Bloody Thursday and the Memorial Day Massacres, where hired gunmen and police opened fire on union families, killing people who committed no crime other than espousing the ideas of unionism.

If we took a moment to examine the long and treacherous road labor has been forced to travel, we would see not only common men and women reaching moments of true greatness and sacrifice, but that these moments have been created by the shear determination and aspirations for a better world. It is a history that is both tragic and momentous. However, most importantly, it is our history and one that we should bring to the surface.

Beginning last fall, Local 324 began providing labor classes to union stewards and activists with the hope of instilling in them a deeper understanding of the sacrifice made by those who came before us. It is through this understanding that we will be able to revive the history of working people and those who have truly formed this country and fought for the privileges we hold so dear. By bringing our past to the surface, we are taking the first steps in preserving our legacy.