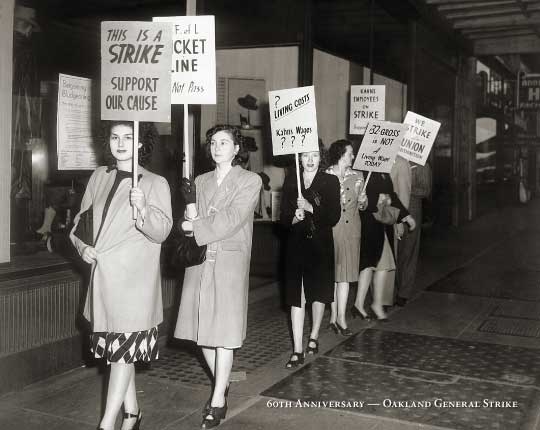 For two days in December of 1946, the streets of Oakland were host to a worker’s holiday. Nearly 130,000 workers refused to work, shutting down commerce in the East Bay, and instead they flooded the streets in a show of solidarity against union busting. What started off as a small retail clerk strike grew into labor using its most effective (and now illegal) weapon – the general strike.

A month earlier, 400, mostly female, retail clerks from Hastings and Kahn’s department stores walked off their jobs to protest the firing of a fellow employee for union activity.

The Retail Clerks International Association, Local 1265, was engaged in an organizing campaign against the two department stores. The stores and the Retail Merchants Association (RMA) were bitterly opposed to any attempts by labor to organize the retail industry leading to a public showdown between business and labor.

For 28 days, negotiations between the employers and retail clerks were at a standstill. But tension grew deeper when the RMA, after meeting with city and business leaders, declared it was going to break the strike with deliveries from a non union-trucking firm from Los Angeles.

Police offered protection for the delivery and cordoned off six blocks around the stores to prevent the pickets from halting the deliveries. By the next day at least 250 police were guarding the new perimeters with machineguns and tear gas.

The operators removed the control mechanisms from the streetcars and joined the picketers and their supporters.

For the rest of the day, a growing number of strikers and onlookers gathered downtown to view the spectacle. Meanwhile, unionists were meeting to demand action in response to the police involvement.

The next day, the AFL (American Federation of Labor) union leaders voted unanimously for a general strike. On December 3, an estimated 130,000 AFL members from 142 unions refused to work, and CIO (Congress of Industrial Organizations) members declared they would honor AFL picket lines.

The Central Labor Council (CLC) called for striking workers to come downtown for mass rallies and picketing. Thousands flooded the streets. Observers described the scene as a “carnival-like atmosphere.” Strikers and sympathizers sang and danced to guitars and music played from loud speakers.

Union officials stated that this wasn’t a strike but rather a “worker’s holiday.”

After 54 hours, the general strike ended. As for the retail clerk strike, it continued for nearly five more months before it was finally resolved.

The Oakland “Worker’s Holiday” was one of six general strikes to occur in 1946, setting the all time record for strikes and work stoppages in the U.S. It was also the last general strike to occur in the United States. In 1948, Congress passed the Taft-Hartley Act, making solidarity strikes illegal – ending the use of one of labor’s most effective tools.