Miners of West Virginia have long history of struggle

Home / Miners of West Virginia have long history of struggle 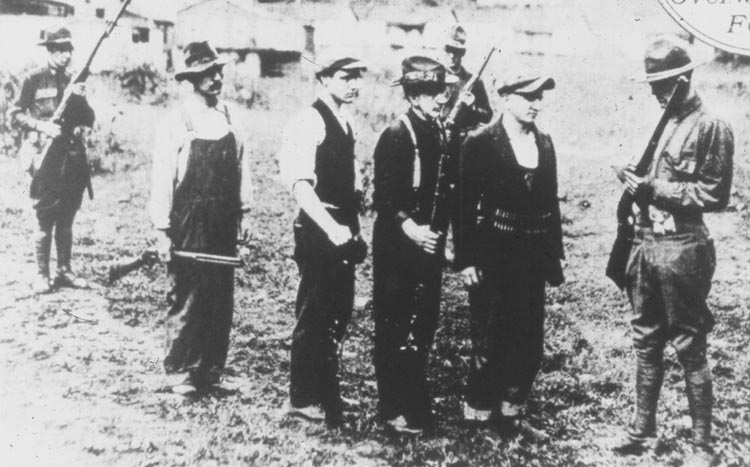 For 10 days in 1921, nearly 15,000 union miners clashed against company-paid deputies and state police in the mining hills of West Virginia. This incident, known as the Battle of Blair Mountain, was not only the largest labor uprising but also the largest armed insurrection on U.S. soil since the Civil War. The battle would not only determine the fate and lives of men and women of the time, but would have an impact on the lives of mine workers ninety years later.

A conflict had been brewing for some time in the southwestern West Virginia mine counties. The United Mine Workers (UMW), under the leadership of John L. Lewis, were determined to organize what was considered the last bastion of non-union mines. However, this was made difficult by company-forced “yellow-dog” contracts, binding agreements that allowed employers to fire workers for joining unions, which would also mean eviction from their company-owned housing.
Despite threats by the employers, union organizers signed up more than 3,000 of Mingo County’s 4,000 miners. Employers responded by using Baldwin-Felts Detective Agency, a union-busting company, to evict union miners and their families from their homes in the town of Matewan. The mayor and police chief, Sid Hatfield, working side-by-side with deputized miners, tried to stop the Baldwin-Felts detectives, which led to a twenty-minute shootout. Two miners, seven detectives, and the mayor died in the incident. A little over a year later, on Aug. 1, 1921, Baldwin-Felts detectives shot Sid Hatfield more than seventeen times as he stood on the courthouse steps in Welch, WV.
Sid Hatfield’s death enraged the miners and the community. On August 24, angry miners gathered at Lens Creek Mountain in Kanawha County and marched to the mines in Mingo County to demand union recognition, through force if necessary. The numbers swelled close to 13,000 as the march progressed. The miners tied red handkerchiefs around their necks to distinguish themselves from the opposing forces, resulting in the moniker–Rednecks.
Meanwhile, the county of Logan laid right in the path between the miners and their destination. The County Sheriff, Don Chafin, who was supported financially by the Logan County Coal Operators Association, began to set up defenses on Blair Mountain to stop the march from progressing. Attempts to squash the rebellion before the marchers got to Logan County were undermined by reports that Chafin had been deliberately shooting union sympathizers.
By August 25, the first skirmishes occurred, and within four days, the battle was in full force. The two armies clashed along the top of Blair Mountain’s Spruce Fork Ridge, firing more than a million rounds of ammunition at each other. Private planes were hired to drop homemade bombs on the miners, and the U.S. government also provided Army MB-1 bombers to drop both gas and explosive bombs. Up to 30 deaths were reported on Chafin’s side, and 50 to 100 on the union miners’ side.
By September 2, federal troops had arrived. The U.S. Army and Air Corps ultimately crushed the rebellion without firing a shot. The union surrendered rather than fire upon American soldiers. Still, 985 miners were indicted for murder, conspiracy to commit murder, and treason. The miners, however, had the jury’s sympathy and were mostly acquitted. Of the few who weren’t so lucky, most were paroled by 1925.
West Virginia miners have referred to the Battle of Blair Mountain as the moment the union was born. But in 1984, near the town of Matewan, the UMW would do battle again with the coal companies, this time with AT Massey. The strike lasted 15-months and would see the repeat of the use of threats and violence by company thugs and pro-company police. The AT Massey strike was a bitter battle for the union and resulted in the decline of the UMW in the mines of Appalachia. Both sides used the Battle of Blair Mountain as a reminder of what was at stake.
On April 5, this year, AT Massey became a household name when 29 miners lost their lives to an explosion at a Massey mine in Montcoal, West Virginia–just 1 hour and thirty minutes from Blair Mountain. Their deaths, many say, would have been prevented if the union had been in the mines.