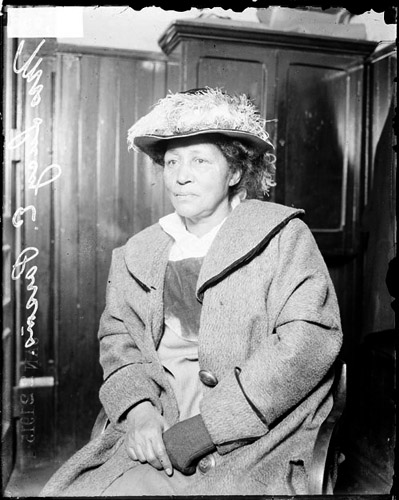 It is said that behind every great man stands a woman. However, often times a woman refuses to be forced into this supportive role. Such is the case with Lucy Parsons, a woman whose influence spanned well into two centuries and who refused to allow herself to be subjugated to second-class citizenship, regardless of race and gender.

Lucy Parsons Little is known about Lucy Parsons’ early life. She was born in Texas in 1853, possibly as a slave. After the Civil War, she married Albert Parsons, a former confederate soldier. In 1873, fleeing from the intolerant reactions to their interracial marriage, the couple moved to Chicago.

While in the Windy City, the couple began organizing workers, leading thousands on strike to protest poor working conditions and long hours. Both were members of the Knights of Labor, one of the first labor federations in the country, and founding members of the International Working People’s Association, an early militant labor organization.

On May 4, 1886, during a union rally for the 8-hour day in Chicago’s Haymarket Square, a bomb exploded killing eight police officers. Police, in response, opened fire into the crowd killing at least seven civilians. Eight local radical labor leaders, including Lucy’s husband, were rounded up, charged, and found guilty, not of participating in the actual explosion, but with propagating ideas that led to the act. Evidence of the men’s connection to the act has never been produced. Seven of the men were sentenced to death. Four (including Albert) were hanged, two had their sentences commuted to life, and one committed suicide the day before his execution. The two remaining men were later pardoned in 1893. The incident, now known as the Haymarket Affair, is still considered to be one of the worst acts of judicial injustice in American history.

Lucy Parsons achieved international fame in the defense of her husband, but she was also a staunch activist against various forms of social injustice. She dedicated herself to the struggles of African-Americans, as in the case of the Scottsboro Eight, and also helped to establish the Women’s Labor Union in Chicago. In 1905, she even helped found the Industrial Workers of the World, one of the first organizations to advocate organizing by industries, rather than by trades.

Due to the attention she received by the authorities, she also became an advocate of the rights of free speech. For over 30 years the police shut down her lectures, often before she ever reached the podium. The Chicago police described her as “more dangerous than a thousand rioters.”

In 1938, she saw a portion of her life’s work realized when congress proposed the Fair Labor Standard Act, establishing a minimum wage and a maximum workweek of 44 hours; these were later improved to include higher wages and a 40 workweek (thus creating an 8-hour day.)

On March 7, 1942, she tragically died after her house caught fire. She was 89 years old. Even then, the state still viewed Lucy Parsons as such a threat to the status quo that police seized her library of over 1500 books and all of her personal papers.

Despite tragedy, suffering, and pain, Lucy Parsons refused to back down or be silenced. In 2004, even though authorities had defamed her throughout her life, the City of Chicago acknowledged her life’s work by naming a park after her. Thus, suggesting that while behind every great man stands a woman society benefits greatly when that woman steps forward.