The Banning of Steinbeck’s The Grapes of Wrath

Home / The Banning of Steinbeck’s The Grapes of Wrath 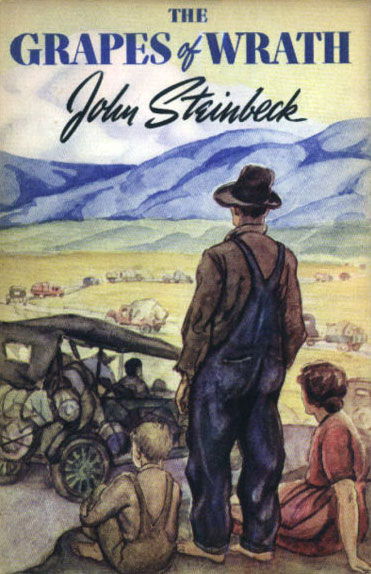 On August 24, 1939, three men stood above a small metal trashcan with a copy of John Steinbeck’s The Grapes of Wrath in hand. As a newspaper photographer snaps a shot, Clell Pruett, a local sharecropper, tosses the book into the trashcan, which was then followed by a match. Pruett, along with his boss, the cotton titan, Bill Camp, and Associated Farmers board member, L. E. Plymale, watched as the flames consumed the book.

Just three days prior, the Kern County Board of Supervisors voted to ban the novel claiming the book was vulgar and distorted facts about the treatment of migrant workers; others felt that it was the first honest piece about the plight of those fleeing from the Dust Bowl only to find themselves exploited in the fields of California. Less than a year after being published, the book would divide Kern County in half over whether people should have the right to read it’s controversial content.

Set during the Great Depression, The Grapes of Wrath tells the story of the Joad Family who, due to the severe drought of the Dust Bowl region and the loss of their home, were forced to leave. Enticed by a handbill promising high wages and an abundance of jobs, the family heads to California, only to be met with bigotry, low wages, union busting and the realization of a broken promise.

To Steinbeck, the Joad family represented the experiences of the refugee sharecropper coming to California to harvest the orchard and vineyards. The influx of destitute citizens created a strain on local resources and competition for jobs. The migrants were met with resentment from locals who were fearful and angry at the flood of newcomers, who they disdainfully labeled as “Okies.” As an example of the resentment, in 1936, the Los Angeles Police established a “bum blockade” at the California border to keep out undesirables.

Steinbeck’s novel attempted to reveal the hardships faced by this migrant population; in the process attacking many of those he felt were responsible, including the Associated Farmers. The Associated Farmers’ mission was to organize local citizen committees to pass anti-picketing regulations to derail farm workers’ strikes and union organizing. The organization also worked with vigilante groups to break strikes and attack union leaders. The group feared the migrants might form a union to demand better wages and did what it could to undermine this effort.

The Associated Farmers of Kern County argued that they paid their workers decent wages, despite the recent strike in the cotton fields and the history of union busting. The book, they argued, was a blatant lie and even went so far as to counter Steinbeck’s novel with their own. Despite the attempt to argue that the ban was due to obscene language in the book, it was clear that the only offended party was the Associated Farmers and its allies. County officials felt that because the fictional Joad family landed in the county that it would have a negative impact on tourism. However, the migrant sharecroppers were, overall, appreciative of Steinbeck, who they saw as bringing their story to light.

Led by a determined librarian, Gretchen Knief, and the American Civil Liberties Union (ACLU), opposition against the ban began to mobilize. Also involved in the fight were several local unions – Oil Workers Union, Hod Carriers Union, Butchers Union the Brotherhood of Engineers – and the Workers Alliance, an organization of relief recipients. Their arguments were centered on the infringement of constitutional rights and the hidden motivation of the county supervisors and the Associated Farmers.

For several years, there were many attempts to repeal the ban with little success, until January 24, 1941, when such a vote did succeed. The books were returned to library shelves. Ironically, the ban on the book actually inspired more people to read the novel, bringing attention to plight of the refugee sharecropper. The censorship of The Grapes of Wrath was a key event to the later creation of the Library Bill of Rights, ensuring a citizen’s right to have access to material regardless of its views.

Nearly sixty-five years after Bill Camp recruited Clell Pruett for the photo op Pruett finally read the book he was so willing to burn. Still unyielding, Pruett had no regrets burning the book at his boss’ request.