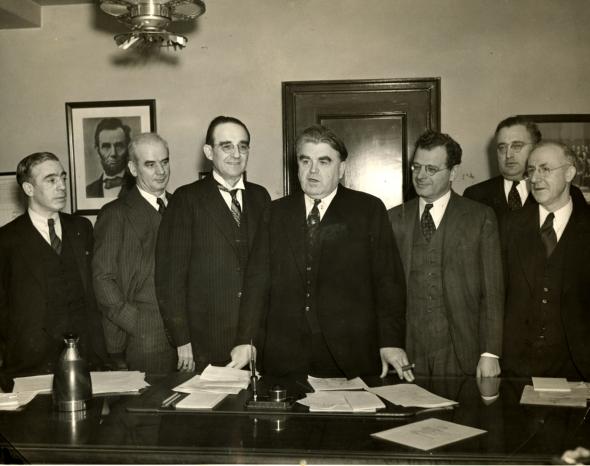 Mass production industries were developing on a wide scale in the early 1930’s. The need for new methods of union organizing became abundantly clear. The leadership within the American Federation of Labor (AFL), argued that these new industries should be organized as in the past on a craft basis.

This often meant that there could be up to twenty different unions per factory. Each of the twenty unions would represent a specific craft within the factory. Another faction within the AFL believed that this would be too cumbersome and inhibit the labor movement from organizing within the growth industries. This faction pushed for individual unions representing all of the workers in an entire industry.

In November 1935, John L. Lewis, head of the United Mine Workers, announced the creation of the Committee for Industrial Organization (CIO). This committee was composed of about a dozen leaders of AFL unions. Lewis voiced increasingly bitter attacks on his colleagues in the AFL, and in 1936, the various CIO unions were expelled from the Federation.

In 1938 the Industrial Unions changed their name to the Congress of Industrial Organizations. The CIO began a remarkably successful series of organizing campaigns and over the next few years put industrial unionism squarely on the map of American history.

At the same time, the unions remaining in the AFL registered even more substantial gains in membership. In time many of the old antagonisms had died out and the old issues had been resolved. The stage was set for merger of the two labor groups. They were reunited at the AFL-CIO convention in New York in 1955.

At the AFL_CIO convention in July of 2005, leaders from five of the largest international unions expressed their dissatisfaction with the direction of the labor movement. The greatest area of disagreement was the lack of focus on organizing new workers into the labor movement.

Although some reflexively wince at the thought of any disunity among the major players in America’s contemporary Labor Movement, history suggests those fissures can be invigorating.

Activists within the UFCW, Teamsters, and SEIU are hoping that’s the case. They recently led the way in the most recent organizational split when they bolted the AFL-CIO and created the Change to Win Federation in March 2006. The other unions to participate in the breakup are HERE and Laborers.

Organizing and national priorities, as in years past, were primary issues in the most recent breakup. If history repeats itself, the nation could once again have two separate but thriving institutions with the same overall goals in mind.