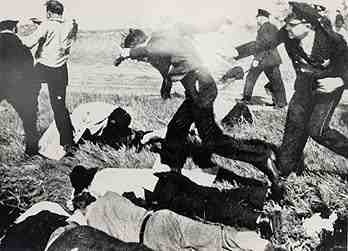 Memorial Day, 1937, was an unusually hot spring day in Chicago, IL, with temperatures reaching 88 degrees. An estimated 1500 strikers and sympathizers were gathered at Sam’s Place, an old dance hall being used as a strike headquarters by the Congress of Industrial Organizations’ (CIO) Steel Workers Organizing Committee (SWOC). The strike was less than a week old, and the mood was festive, with vendors wheeling wagons of cold pop and brick ice cream. Children sat upon their father’s shoulders as they listened to orators speak from the platforms and performers sing songs of fallen labor balladeer, Joe Hill.

The strike, which involved 85,000 steelworkers, targeted three independent steel companies (collectively known with others as ‘Little Steel’). The three included Republic, Youngstown Sheet and Tube, and Inland. Several months prior, Big Steel agreed to a contract and recognized SWOC as the bargaining agent for its employees. Little Steel agreed to match the contract’s wage increases, but refused to recognize the union.

When the strike was called on May 26, 1937, Youngstown Sheet and Tube and Inland closed their plants to wait out the strike. However, Tom M. Girdler of Republic Steel believed the only way to deal with a strike was with espionage, scabs, and stockpiles of ammunition and tear gas.

As the speakers ended their presentations on Memorial Day, a call was made to march to the Republic factory, a third of a mile down the road, and form a picket line around the facility. Nearly a thousand people, including strikers, women, and children, formed a line and began to head in the direction of the factory. As the crowd grew closer, they cut off the road into a prairie, chanting “C-I-O, C-I-O!”

When the marchers arrived at the factory, they were met by 500 policemen with billy clubs in hand. Many of the clubs were not police-issued, but non-regulation clubs supplied by Republic Steel. Tear gas was also given to the police by the company.

The captain halted the marchers with, “You dirty sons of bitches, this is as far as you go!” When the strike leaders responded that they had a right to be there, the captain retorted, “You got no rights. You Red bastards, you got no rights.”

Police began to shove the marchers with billy clubs as tear gas grenades flew into the air. Children suddenly cried with panic, and the whole picket line fell back as men stumbled, cursed, and gasped for breath. Police, in a frenzied state, began to take out their pistols, shooting marchers in the back as the fled for safety. Those who dropped to the ground to avoid being shot were soon met by swinging batons against their skulls. The brutality continued until ten were dead or dying and nearly a hundred wounded.

While both sides blamed each other for the massacre, the death toll of the strike continued to grow as six more strikers were killed by police outside of the Republic Steel factory in Ohio. Steelworkers called off the strike and the union turned to the National Labor Relations Board (NLRB.) In August, 1941, Republic Steel and other Little Steel companies agreed to cease and desist from committing unfair labor practices. One year later, they signed a contract with the new United Steelworkers of America.

Little Steel had only delayed the march of unionism, and the sacrifice of the workers on Memorial Day, 1937, was not in vain. Those who suffered so greatly did so in the hopes that future workers would have the right to organize and live better lives. They faced brutality by those, ironically, whose job it is to protect and serve the public. Thus, perhaps, as we remember those who have died on the battlefield for our freedom, we should also remember those who have died on the picket line.