A Martyr blooms in the Lettuce Fields

Home / A Martyr blooms in the Lettuce Fields 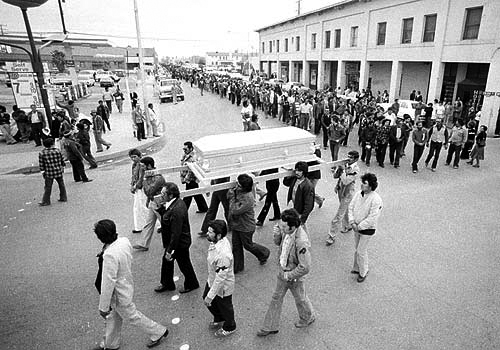 Shortly before noon on Saturday, February 10, 1979, Rufino Contreras and a half-dozen other United Farm Workers walked onto a lettuce field owned by Mario Saikhon. They were into the 22nd day of a bitter strike against Saikhon and had hoped to convince the scab workers to honor their line. But as they approached the scabs, three armed company foremen opened fire on them. As they scrambled to safety, Jose Luis Contreras, also amongst the group of farm workers, turned to see his brother, Rufino, laying face down in the mud. For over an hour, Jose Luis and the other men attempted to rescue Rufino as he lay dying in the field, but were fended off by gunfire. Only after the arrival of the police were they able to get to him. Unfortunately, it was too late; Rufino Contreras later died at the local hospital.

This strike began in the lettuce fields of Imperial Valley. The United Farm Workers (UFW) had been trying to negotiate a contract with 28 growers, but were far from any agreement. Agricultural workers were only paid a wage of $3.70 an hour, $4.50 less than Teamster drivers. With their families living in squalor-like conditions, the farm workers wanted a 40-60% wage increase. The employers, however, would only agree to an increase of 7%. With such a gap between the two sides, UFW members from ten of the 28 growers walked off the fields.

Rufino worked along side his father and brother in the Saikhon fields. He was a loyal union member. Cesar Chavez, the president of the UFW, noted that Rufino would often function as his security when they traveled together throughout the Imperial Valley. So, it came as no surprise to anyone that Rufino took on a leadership role when the strike began. However, even before his death, tragedy would strike Rufino. His wife was severely burned in a kerosene accident at their home, receiving third-degree burns over most of her body. Rufino took time away from the picket line to stay with his wife in the hospital as she was recovering.

Rufino was a loyal family man, but he also felt an obligation to his union. On February 10, he returned to the line. He was elated that his wife had been approved for the union’s medical insurance. His emotions and pride in the union ran high that day. Sadly, as he approached the scab workers, a single bullet pierced his head.

Cesar Chavez calmed demands for vengeance by fellow UFW members and called for the immediate stoppage of all vegetable farming in the Imperial Valley, nearly ceasing production completely.

Days later, on February 14, Chavez stood in front of 7,000 mourners, offering the eulogy at Rufino’s funeral. “Rufino is not dead,” he said. “Wherever farm workers organize, stand up for their rights, and strike for justice, Rufino Contreras is with them.” Sitting in a wheelchair, still in bandages, and holding their two children tight was Rufino’s wife. Also amongst the mourners was Governor Jerry Brown.

On February 22, still emotional over Rufino’s death, 1,000 or so farm workers clashed with police in the lettuce fields of Imperial Valley. Governor Brown had to call in the National Guard to restore order.

The three foremen who initially opened fire on the farm workers were arrested, but released on bail. A judge would later exonerate them, ruling that there was insufficient evidence to prove which of the three killed Rufino. The same judge, William Lehnhardt, would later rule that the UFW engaged in acts of violence during the strike and order them to pay 1.7 million dollars in restitution. Even though his wife worked as a scab for one of the growers during the dispute, Lehnhardt refused to excuse himself from the case.

As for the strike, it continued throughout most of the year, expanding throughout California and into Arizona. By mid-August, some growers began to negotiate their own contracts separately. By December, most growers had reached deals with the union that included wage increases ranging from 43-57% during the duration of the contracts.

Rufino’s death became the battle cry that rallied the union to victory. His blood planted a seed of defiance in the rich soil of the Imperial Valley. On that tragic day, something other than lettuce began to grow. Farm workers demanded more than a meager existence, and Rufino symbolized their willingness to obtain better lives. In those fields, a martyr bloomed, never to be forgotten.