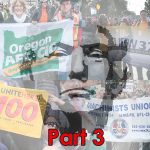 Among those to fall by the wayside were the right to organize parts of plants, rather than full factories and holding joint employers – both local franchises and corporate headquarters of the same firm, such as McDonald’s – responsible for obeying or breaking labor law.

In that memo, Robb also said he wants to allow discrimination against union workers during bargaining and let firms ban unions from using company e-mail systems to announce meetings, among other things. And companies would be able to impose restrictive handbook rules and monitor – and fire workers for – their social media postings, Robb’s memo says.,

“Robb has spent his career trying to strip workers of their rights, defending corporations accused of mistreating workers, and trying to undermine the watchdog agency he’s now seeking to join. Someone who views unions and collective bargaining as a threat to be dealt with, rather than essential rights to be protected, has no business serving as the top lawyer for the Labor Relations Board,” Sen. Sherrod Brown, D-Ohio, said as almost all Senate Democrats opposed Robb for the post.

“Failure to keep injury/illness records means that employers, OSHA, and workers cannot learn from past mistakes and makes it harder to prevent the same tragedies from happening to others. By signing the resolution to block this rule, Trump gave employers a get-out-of-jail-free card.” The GOP-run Congress later ratified that decision, banning OSHA from ever tackling the issue again.

“An examination of the regulations repealed or rescinded reveals many of the rules that were eliminated provided important protections to our nation’s workers,” EPI says. “Trump and congressional Republicans blocked regulations that protect workers’ pay, safety, and rights to organize and join a union. By blocking these rules, the president and Congress are raising the risks for workers while rewarding companies that put their employees’ health, safety, and paychecks at risk.”