Washington, DC – Local United Food and Commercial Workers (UFCW) Unions – representing 100,000 Kroger and Albertsons workers in twelve states and the District of Columbia – came together today in Washington, D.C. to demand regulators halt the proposed merger between the country’s two largest grocery chains. The workers detailed the devastating impacts that will befall workers, suppliers such as farmers and ranchers, and consumers if the merger is approved by the Federal Trade Commission (FTC).

“Essential grocery workers have strongly opposed this proposed merger from day one because we knew it would cause stores to close, jobs to be lost, and prices to go up,” said Faye Guenther, President of UFCW Local 3000. “It’s clear after this hearing that Kroger and Albertsons have no plan on how to run this proposed mega-company and are just saying whatever they can to get it approved by the FTC without regard for the working families they employ and serve. We’re glad Senator Amy Klobuchar (D-MN) and Senator Mike Lee (R-UT) convened this hearing to really dig into the impacts of the merger on our communities and hold the CEOs accountable for workers’ livelihoods.”

Frontline essential workers spoke out before a hearing by the Senate Judiciary Subcommittee on Competition Policy, Antitrust, and Consumer Rights, where Senators scrutinized Kroger and Albertsons CEOs about the merger.

“In a few months, Haggen shut down. Thousands of my coworkers and I lost our jobs. I had to juggle two jobs: cleaning houses and waitressing to be able to pay my bills and feed my family,” said Lugretzia Berg, a UFCW 770 member and a Vons (Albertsons) Front End Supervisor from Camarillo, California whose store closed as part of the 2014 Albertsons-Vons merger. “We were all put on a waiting list to get our jobs back at Vons. We had to reapply for a new position. My coworkers were unemployed for a year or more and some never got their jobs back. Others came back at a lower wage rate and have never been able to recover the standard of living they had before that merger. We don’t want to go through the same devastating experience again.”

“I’m scared of what this merger will mean for me as a worker, and what happens to my job when hundreds and hundreds of local grocery stores are closed,” said Andres Becerril, a Front End Supervisor at King Soopers (Kroger) for 12 years and member of UFCW Local 7. “But this is not just about me. The merger would create a ripple effect for potentially tens of thousands of grocery employees and their families: lost wages, lost benefits like hard earned pension plans, lost healthcare coverage, and higher grocery prices. Our local suppliers, farmers and ranchers, who create jobs in Colorado and Wyoming, will also be hurt as this new mega company will control shelf prices with no competition. we call on the FTC to hear our concerns and stop the merger.”

“This merger is based on pure greed;I want the executives and Wall Street bankers who cooked it up to know how devastating it will be for both workers and customers,” said Judy Wood, a cake decorator at Albertsons for 34 years and a member of UFCW Local 324. “The stores are going to raise prices without consequence because they won’t face competition. Kroger will close down stores that are too close to one another, putting customers out of options and workers out of jobs. It’s estimated over 5700 workers could lose their jobs just in Southern California. So we need to do everything we can to fight this merger.”

“Over the last three years, we have lived through the COVID experience and me and co-workers have served our community and served our employers and provided essential services in a time of crisis. We have all helped make our stores run,” said Naomi Oligario, a Front end Checker at Safeway (Albertsons) for 37 years and a member of UFCW Local 3000. “We are all concerned with this proposed merger and the $4 Billion giveaway to rich shareholders instead of investing in us – the workers who helped make the profits. We need safer stores, our customers need lower prices, we need more competition – not less.”

“These private equity guys are not from the grocery industry. They have never worked in one of our stores. They do not know or care about our business – all they care about is making money for themselves,” said Jane St. Louis, a Front End Associate at Safeway (Albertsons) and a member of UFCW 400. “And now, they are trying to give themselves a $4 billion payday before this merger is even reviewed by the FTC. What does my future hold working for a company without any money? How will Safeway keep its promise to fund our pension? You can see why workers like me are worried.”

Tuesday’s Senate Judiciary Subcommittee hearing is the latest in a series of ongoing efforts to scrutinize the proposed Kroger/Albertsons merger, along with an alarming, up to $4 billion “special dividend” announced by Albertsons in connection with the merger agreement. In a letter to the Federal Trade Commission urging the agency to intervene, more than two dozen antitrust experts and local unions representing Albertsons’ workers decried the payout as “nothing less than an out-and-out looting of the company” and a brazen attempt to destabilize the company ahead of regulatory review of the merger.

Washington state Attorney General Bob Ferguson filed a lawsuit in state court seeking to stop the payout and a temporary restraining order was granted through December 9th until the matter can get a full hearing on antitrust grounds.

It is unfortunate that Judge Nichols sided with six ultra-wealthy board members and shareholders instead of the countless essential workers whose livelihoods are threatened by this dividend payment. It’s clear that the payout is only sought to enrich private equity owners and to ensure the demise of Albertsons by wiping out the company’s cash and saddling it with double its current debt load. We applaud Attorney General Rob Bonta and the Attorneys General from Illinois and Washington D.C. for standing up for grocery workers and customers by attempting to stop this unprecedented dividend payment. We will continue to put every resource at our disposal to protect the thousands of workers who will be left out in the cold if this deal goes through.

The $4 billion special dividend payment remains paused under a temporary restraining order issued by a King County Superior Court commissioner in Washington state and today’s ruling in federal court has no bearing on that case.

On the day of the planned “special dividend payment,” workers joined Rep. Katie Porter to urge Albertsons stop the massive $4 billion payout to shareholders that will be bad for workers and bad for customers.

And your advocacy is making a difference! A Washington state court issued a temporary restraining order last week, stopping Albertsons from issuing the payment. The next hearing Thursday, November 10, 2022, so we can’t let up. The companies need to feel the pressure about how bad this dividend payment is, and how bad the merger is for workers, customers and our communities. 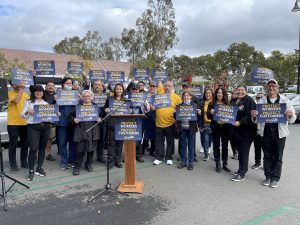 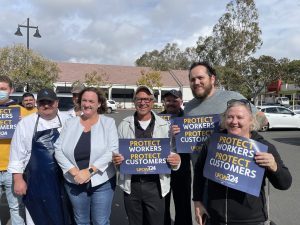 Attorneys General from California, Illinois and Washington D.C. have filed a lawsuit in D.C. District Court to stop Albertsons from paying its private equity shareholders a $4 billion dividend more than a year ahead of the grocery giant’s proposed merger with Kroger. The Attorney General of Washington State has also filed a lawsuit in King County Superior Court.

UFCW 5, 7, 324, 367, 770, 3000, and Teamsters 38 came out strongly against the proposed merger between Albertsons and Kroger, and we’re proud that the Attorneys General in our states are following our lead to help stop the dividend that cripples Albertsons’ ability to operate its stores, threatening the jobs of thousands of essential workers and making groceries more expensive and scarce for millions of families.

We’re glad Attorney General Rob Bonta came together with Illinois and Washington D.C. to stop Albertsons from robbing our communities to pay its private equity shareholders billions. Albertsons should be lowering prices for hard working people and investing in essential workers instead sapping the cash the company needs to operate and saddling it with $1.5 billion in new debt in order to fatten executives’ pocketbooks.

In part of the proposed merger announced by Kroger and Albertsons less than two weeks ago, the companies buried that Albertsons is planning a $4 billion payout to shareholders. Today, six Attorneys General, including California, pushed back on Albertsons to protect workers and consumers by demanding the companies stop the issuance of the special dividend until regulatory review of the merger is complete.

We expect the CEOs to respond positively to the Attorneys General by the end of the day on Friday and stop the issuance of the special dividend. Any effort to rush this payment threatens thousands of jobs of essential grocery store workers and millions of shoppers who would suffer from reduced competition, reduced choice and increased costs in markets across the United States.

We applaud Attorney General Bonta for his leadership and action to protect workers and consumers in California.

To All Essential Grocery Store Workers

On the heels of the proposed merger between grocery giants Kroger and Albertsons, on Tuesday, Albertsons announced that it will pay out a $4 billion dividend to shareholders on November 7, 2022.

We want to make it clear to our hard-working members that UFCW strongly opposes this dividend payout.

Taking billions in assets out of a company that is running well, employs hundreds of thousands of essential workers, and provides daily necessities for millions of customers is a bad idea for the workers as well as customers. That $4 billion could be spent to lower prices of food for consumers facing unprecedented levels of inflation, pay workers more or invest in safer stores for workers and customers.

We are looking to regulators and elected officials to act quickly to slow down this process. As grocery store workers, we want you to know that we have been, and continue to do everything in our power to stop this dividend payout and ensure your local grocery stores remain fully funded.

Today it was reported that grocery giant Kroger could announce a deal this week to buy rival grocery company Albertsons, resulting in discussions of a potential merger that would devastate the grocery industry.

The reported merger discussions of two grocery giants is devastating for workers and consumers alike and must be stopped. Just as UFCW workers stood together to negotiate landmark new contracts with both Kroger and Albertsons/Safeway last year, we will stand united to fight for access to nutritious food, safe shopping experiences, and investment in good jobs in our communities. UFCW workers emerged stronger from the COVID-19 pandemic, winning landmark protections against the virus, store violence and other threats. Standing together, we know our voices are stronger than the corporations’ anti-worker rhetoric.

A merger of two of the largest grocery companies in the nation will no doubt create a monopoly in the grocery industry, with one company owning a $47 billion market share.

UFCW’s members have been a leading national voice on enforcing federal and state antitrust laws and principles to keep the marketplace fair and prevent corporations from using monopoly power to exploit customers and workers. We are asking the appropriate elected officials to step in and stop this merger to protect workers and consumers.

UFCW knows the collective voice of workers will reach the right ears to stop this potential devastating merger.