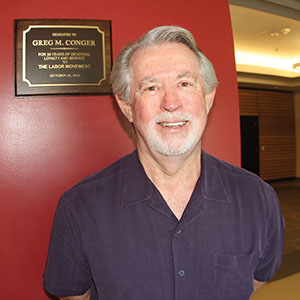 A career that spanned 35 years and made an indelible impact in the lives of thousands of hard working men and women in Southern California ended Oct. 1 as Gregory M.Conger retired from the UFCW.

An event honoring his years of service took place at the Local’s auditorium Oct. 20, drawing a crowd that included the Union’s highest ranking dignitaries from Hawaii to Washington D.C., many of whom took to the podium to praise a long list of accomplishments.

The Local’s newly elected President Andrea Zinder spoke emotionally her partnership with Conger from her earliest days with the Local 324. Her remarks included the biggest surprise of the evening as she announced that the very auditorium. in which they were gathered would soon bare his name.