Survey results come as no shock to workers 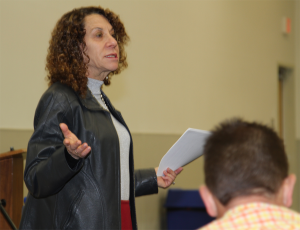 Several dozen members attended a meeting designed to inform them about a recent survey on the economic hardships faced by Disney workers and to discuss issues surrounding upcoming contract negotiations set to begin April 17.

Members listened attentively as Secretary-Tresurer Andrea Zinder summarized the survey which has received nationwide attention since its formal release two weeks ago.

Newspapers and broadcast networks have covered the survey results in great detail, prompting many media outlets and social activist groups to criticize Disney for its low wages.

But audience members at this meeting had a different reaction, expressing little or no surprise at the survey findings. 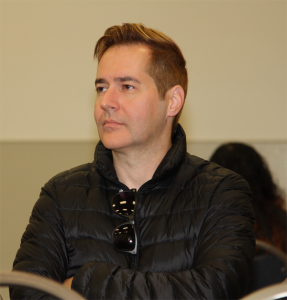 “We see this every day. This isn’t news to any of us,” said one worker. The fact that an academic analysis such as this one has finally proven what so many have been saying about the hardships of being a Disneyland employee gave many a sense of vindication, however. “I had friend and even a couple members of my family come to me and say we had no idea that the company paid so little because you always seem so happy,” said a member who works at World of Disney.

Zinder said that publicity from the survey has at least exposed the company for its grossly inadequate employment practices, but that bad publicity alone won’t be enough to alter its position at the bargaining table. 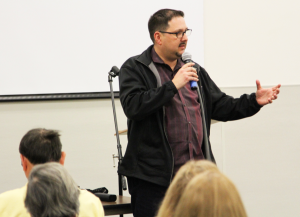 As she reviewed survey results, Zinder pointed out that Disneyland’s CEO Robert Iger’s economic fortunes remained on a starkly different trajectory than those of park employees.

She explained that part of the negotiating process requires Disney to turn over basic employee compensation information to the Union prior to talks beginning. She commented on Disneyland’s formal reaction to the survey results in which company spokesperson said that park employees were happy with their employment status and that most made about $37,000 annually.

“I looked at the information they provided and I have not found anybody making $37,000 a year so it would be interesting to know who they are talking about.”

She concluded by stating that the position of the UFCW and the two sister unions involved in contract talks, the Teamsters and SEIU, intend to make wage increases a top priority.

“You are valuable, the work you do is valuable and this is not ok.” she said. 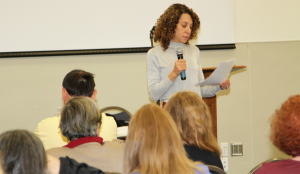 Zinder was followed by a brief presentation from Executive Vice President Matt Bell who said that achieving the union’s goals would require unity. “This is going to require some heavy lifting,” Bell said.

He urged members to galvanize co-workers to stay informed about the progress of talks and informed the audience about one particular political initiative that offered to bolster their bargaining position.

“We are in the initial stages of a push to get a ballot measure out to the voters,” Bell said.

The proposed ballot initiative would require a living wage of $15 per hour that will increase annually with the rate of inflation. Sponsors of the initiative are planning to get 20,000 signatures by a May deadline in the hope of qualifying for the November ballot. 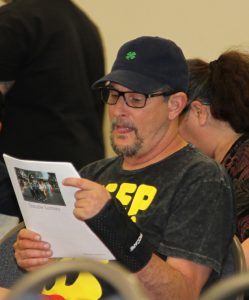 Following the meeting, members expressed cautious optimism that this contract cycle would yield wage increases in line with what they deserve. But many said they expected the process to become contentious and warning newer members about what to expect seemed to be a high priority.

Teresa Owens, a 13-year Disneyland employee said she hoped to help the cause by gathering signatures in support of the wage initiative. Others said that they planned to be more active this time around than in previous cycles and would stay tuned to see how best they could support the effort.

With only a couple of notable exceptions, however, most of the workers interviewed said they would speak only if their names were not published and they not be identified in photos or video. It was perhaps the most telling indication of the mistrust long-term employees have for the company that requires its employees to smile at all times while on the clock.