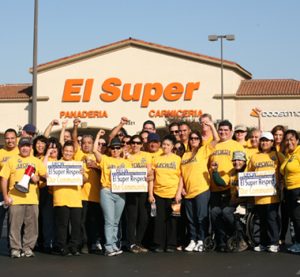 These low-wage, predominantly Latino workers were covered under a collective bargaining agreement (CBA) with El Super that expired on September 27, 2013.

The Union and the bargaining committee met with El Super numerous times between September 2014 and April 2014, where they communicated the importance of the members’ proposals to the Company repeatedly.

El Super submitted their “last, best, and final” proposal which did not adequately address the members’ most important issues: living wages, respect on the job, seniority rights, affordable health benefits, paid sick leave, and a guarantee of 40 hours per week for full-time workers (who are currently only guaranteed 32 hours per week).

El Super implemented its “last, best, and final offer” without fulfilling its bargaining obligations, and after workers told them it was unacceptable by voting overwhelmingly to reject it and authorize their union to call a strike. El Super’s failure to return to bargaining table has gone on since June 2014. UFCW has filed Unfair Labor Practice charges against the company for its refusal to negotiate.

On January 8, 2015, El Super fired Fermin Rodriguez. Mr. Rodriguez was active with his union and a member of the El Super worker negotiating committee. He often gave voice to the workers concerns when speaking to the press or the community. The union was filed Unfair Labor Practice charges challenging Fermin’s termination.

The El Super stores in the U.S. have become a significant contributor to the company’s success. Chedraui’s U.S. stores recorded a sales growth of 10.6% above 2012, and contributed 22% of Chedraui’s total income. By comparison, sales growth at Chedraui’s Mexican stores was 2% in 2013.

The company’s success is continuing into 2014. Chedraui reported a 2.6% growth in EBITDA in the first three months of 2014, same-store sales growth of 1.1%, and customer traffic increased 2.1%. As a result, Chedraui recorded revenues 5.3% more than in the same period in 2013, and operating profit grew by 4.3%.

Forbes estimated (January 2013) the personal wealth of Chedraui’s Chairman of the Board, Alfredo Chedraui Obeso, at over $1 billion. Forbes reported in October 2014 that Mr. Chedraui Obeso is the owner of the 163-foot super yacht, Tsumat, for which he paid an estimated $50 million. 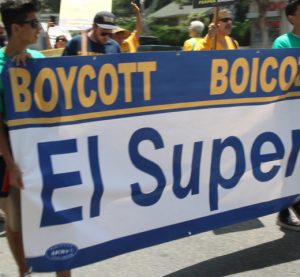 In 2014, El Super stepped up its union busting efforts and workers were compelled to vote, in a US Government supervised election, to re-certify their union. The workers voted on December 12 – by a more than 3-1 – in favor or retaining the UFCW. El Super workers’ mandate followed in spite of an aggressive “Vote No” campaign by the company that included captive audience meetings conducted by El Super CEO Carlos A. Smith.

After the recertification vote, the union promptly sent a letter to the company asking for them to return to the bargaining table. El Super has ignored this request.

El Super’s inaction, and its steadfast refusal to address the workers’ priorities such as more guaranteed hours, adequate sick leave, and fair pay, led to our call for a consumer boycott of El Super markets on December 20. The California Labor Federation and the Los Angeles County Federation of Labor have sanctioned the boycott with their full support.

On Febraury 18, faith-based leaders joined El Super workers and their supporters to announce that one hundred community, labor and faith organizations from throughout Southern California endorsed the El Super boycott.